Capital rates for commercial property continued to fall in the first quarter of 2009 as the U.S. and countries around the world were hit by falling rent rates. According to Royal Institution of Chartered Surveyors’ (RICS’s) Global Commercial Property Survey, the U.S. saw capital values—an investment measure that converts rent into a capital sum—drop significantly. U.S. real estate professionals remained the most pessimistic of all respondents globally when looking at the near-term price outlook, and expect little easing in the pace of price decline in the coming three months.

Weaker tenant demand has led to faster rises in reported available space, which has compounded the gloom toward the rental outlook for commercial space. Rental expectations in the U.S. and Canada in the first quarter of 2009 are still shown to be weakening, but have eased off the drop seen in the fourth quarter of 2008 by nearly half. Still, the rising available space across every region is forcing commercial real estate agents to offer increasingly larger incentive packages in order to secure a deal.

Despite the rental gloom, the rapid re-pricing in some markets may be encouraging investor interest. “Across the U.S., we’re seeing lenders take their lumps, writing down assets instead of hanging on to now outdated value expectations,” said Matt Bruck, managing director, RICS Americas. “The survey revealed that activity in commercial space continues to be slow. Traditionally, activity in commercial space lags behind trends in residential. The sentiment among property professionals in the U.S. is that even if we’re near the bottom, the recovery over the next two years will be minimal. Some of our members are saying that local investment is starting to move as local and regional banks were less dramatically affected by the global crisis.” 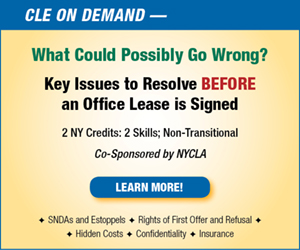 Are You Liable for Personal Injury in Tenant's Space?

Don't Accept Ambiguous Definition of 'Merchandise' in Use Clause