Make Clients Who Promise You a Commission Put It in Writing

Brokers line up a company that may be willing to make an offer on a commercial building owned by a previous client. You make this work and I’ll pay you a commission, the owner promises.

Brokers line up a company that may be willing to make an offer on a commercial building owned by a previous client. You make this work and I’ll pay you a commission, the owner promises.

The brokers send the owner an agreement proposing a 2 percent commission. The owner counters by offering a flat commission of $100,000. The counter agreement bears the owner’s signature, but the brokers text the owner that they still want a percentage commission and don’t sign it. A couple of days later, the owner sends an email thanking the brokers for bringing him the opportunity but also asking them to disengage. “I’ll take it from here,” the owner says.

And so he does, selling the property for $5 million. The brokers sue the owner for a commission of $100,000. As it turns out, $100,000 would have been the commission amount due under either the 2 percent or the $100,000 flat rate deal structure proposed. Even if we didn’t have a written contract, the brokers argue, the owner was unjustly enriched by our efforts and should at least pay us restitution benefits.

The brokers are entitled to a commission because they had an enforceable oral brokerage commission agreement with the owner. True or false?

There are two reasons that this statement is false. First, even though the owner verbally promised to pay the brokers a commission, the sides never agreed on the commission amount. And while you can have a valid oral agreement even when the parties don’t agree on all of the issues, there must at least be a meeting of the minds on the core issues. And no issue is more core to a real estate brokerage commission agreement than the commission amount. The fact that each of the proposed commission formulas in this case happened to result in the same $100,000 amount was more coincidence than evidence of a meeting of the minds.

False would still be the correct answer even if the sides had agreed on a commission amount. And that brings us to our second point: There’s no such thing as an “enforceable oral brokerage commission agreement.” The reason for this is a law called the Statute of Frauds, which requires that certain kinds of contracts be in writing. And real estate brokerage and commission contracts are among the contracts that require a writing, at least in most states, including New Jersey where the case on which this scenario is based took place [DKNJ Real Estate & Appraisal v. Reussi Capital, 2021 N.J. Super. Unpub. LEXIS 235].

The brokers are entitled to restitution as compensation for their efforts to find the owner a buyer. True or false?

In interpreting a contract, courts look not just to the terms of the agreement and legislation (like the Statute of Frauds) but also principles of “equity” designed to do justice to persons who would otherwise get short changed because they don’t have the technical contract law on their side. One principle of equity is “quantum meruit,” which holds that a person who renders valuable services to another should get a reasonable sum of money for those services even though there was no enforceable contract between the sides.

“Beware the Statute of Frauds!”

This and not the Ides of March might very well have been the subject of the soothsayer’s warning had Shakespeare’s Julius Caesar been a commercial real estate broker. You’ll probably never have to use the term “Statute of Frauds,” let alone delve into its dusty and technical terms. But you do have to know it’s there. And because it’s there, you must ensure that all promises to pay a commission are set down in writing that clearly defines the commission amount and when it’s payable. An oral promise will be extremely difficult, if not impossible to enforce, regardless of how many emails, texts, and other bits of “parol evidence” you have to document it.

Last but not least, remember that absence of a written agreement will cost you not only your chances to collect a contractual commission but also restitution, quantum meruit, and other forms of equitable remedies compensating you for the efforts you exert to market the property of an owner who orally offered you a commission but didn’t put that promise in writing. 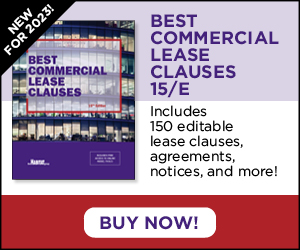